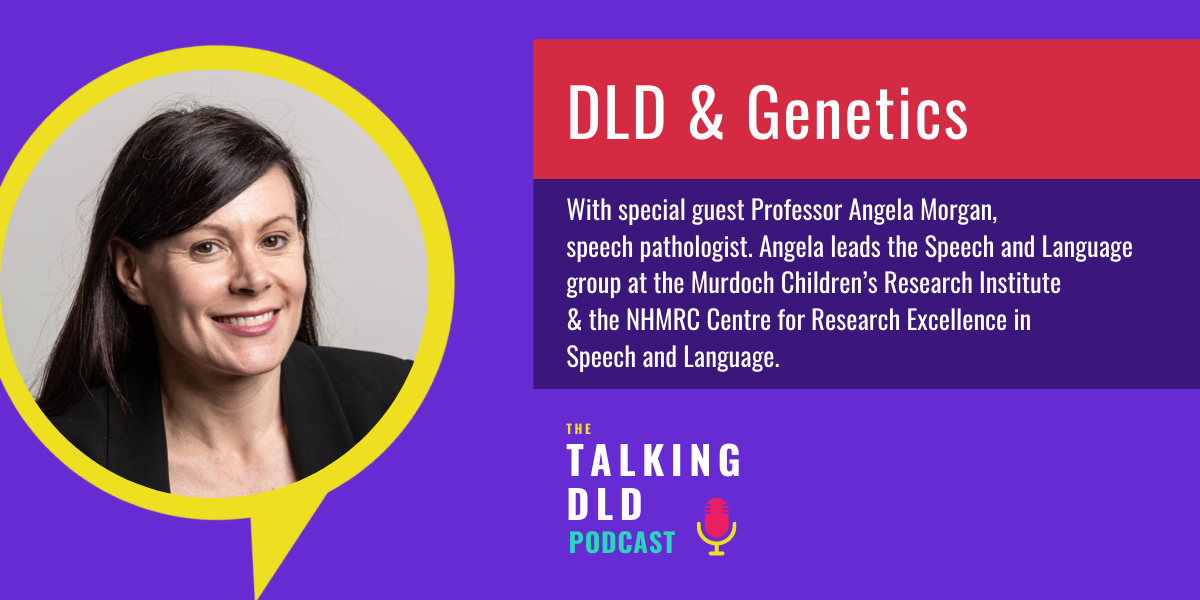 Have you ever wondered about the role genetics play in a person being diagnosed with DLD? In this episode of The Talking DLD Podcast we’re delving into the complex world of genetics with Professor Angela Morgan, a speech pathologist with more than 25 years experience. Professor Morgan leads the Speech and Language group at the Murdoch Children’s Research Institute plus the NHMRC Centre for Research Excellence in Speech and Language.

Listen to this month’s episode of The Talking DLD Podcast, DLD & Genetics below.

Professor Angela Morgan has been a speech pathologist, passionate about supporting children with speech and language needs, for over 25 years. Angela is an NHMRC Elizabeth Blackburn Fellow and leads the Speech and Language group at the Murdoch Children’s Research Institute. Angela is also a Dame Kate Campbell Professorial fellow at the University of Melbourne. Angela’s career has focused on understanding causation, predictors, prognosis and therapies for severe and persistent speech and language disorders in children.

Angela leads the NHMRC Centre for Research Excellence in Speech and Language. The CRE team have identified over 30 genes explanatory for severe childhood speech disorder. The CRE team have now directly translated this work into clinical practice, via a speech genomics clinic at the Royal Children’s Hospital, Melbourne, delivering genetic diagnoses to children with severe speech disorder.

The Genetic and Molecular Basis of Developmental Language Disorder: A Review

Language disorders are highly heritable and are influenced by complex interactions between genetic and environmental factors. Despite more than twenty years of research, we still lack critical understanding of the biological underpinnings of language. This review provides an overview of the genetic landscape of developmental language disorders (DLD), with an emphasis on the importance of defining the specific features (the phenotype) of DLD to inform gene discovery. We review the specific phenotype of DLD in the genetic literature, and the influence of historic variation in diagnostic inclusion criteria on researchers’ ability to compare and replicate genotype–phenotype studies. This review provides an overview of the recently identified gene pathways in populations with DLD and explores current state-of-the-art approaches to genetic analysis based on the hypothesised architecture of DLD. We will show how recent global efforts to unify diagnostic criteria have vastly increased sample size and allow for large multi-cohort metanalyses, leading the identification of a growing number of contributory loci. We emphasise the important role of estimating the genetic architecture of DLD to decipher underlying genetic associations. Finally, we explore the potential for epigenetics and environmental interactions to further unravel the biological basis of language disorders.